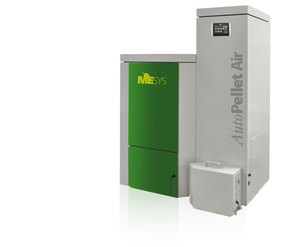 “North American home and business owners have been asking for a hot air pellet furnace that offers the hands-free convenience of a fossil fuel system since the introduction of wood pellet central heating systems,” said BJ Otten, MESys chief operating officer. “We’ve worked for several years developing a product that fits this need and are excited that production is now underway. A limited number of units are available this fall on a first-come, first-served basis.”

The AutoPellet Air has a rated maximum output of approximately 100,000 Btu and has recently qualified for an Efficiency Maine rebate worth up to $5,000 for most Maine residents. The units advanced design is similar to the existing MESys AutoPellet boiler, which is commonly used for baseboard or radiant floor heating, and only requires the simple task of emptying of an ash container two to four times annually.

“For the first time, Maine homeowners who heat with forced hot air can use locally produced fuel that supports Maine workers and families and that has had remarkably stable pricing over the years, ” said Dutch Dresser, a founding director of MESys.”

The company also delivers locally-sourced wood pellet fuel throughout much of the Northeast in bulk, by a delivery truck, much like how oil or propane are delivered.